NOT INCLUDED: Flights, license and services in Buenos Aires depending on your package

Kau Tapen Lodge delivers the world’s best lodging and Sea Run Brown Trout fishing.  Kau Tapen Lodge is Tierra del Fuego’s first Sea Run Brown Trout fishing lodge and after 30 years it continues to offer the highest level of service and accommodations of all the fishing lodges in Argentina.
The lodge sits on Rio Grande’s south bank and anglers will have fast access to its 10 beats within 18 private river miles.  With more private water on the Rio Grande’s largest tributary, the  Menendez River, there is plenty of elbow room.
Kau Tapen offers topnotch Sea Run Brown Trout fishing and boasts over 5 Sea Trout world records. With easy wading and outstanding guides, anglers are successful with multiple daily catches of 10-15 pound fish and have real shots at fish greater than 20 pounds.

Kau Tapen Lodge’s refined accommodations offer a luxurious and welcoming refuge from the harsh elements of Tierra del Fuego. Upon return from the river, anglers are brought their favorite cocktail as they slip out of their waders in the wader changing room. From ceiling to floor to furniture, Kau Tapen’s all wood interior gives off a warm glow that is as inviting as the fire continually burning in the stone hearth. After a long day, anglers relax in the living room and bar area with a cocktail, sharing the day’s events or perhaps thumbing through Kau Tapen’s enviable fishing records dating back to 1984. Guests may enjoy the sauna, Jacuzzi, finish shower or get a massage. The lodge even has loaner rods and a small fly shop in case you need to replenish your fishing tackle.

Kau Tapen Lodge can hold a maximum of 12 anglers in 10 en suite rooms with queen and king beds. During the second week in January through the first week in March, Kau Tapen limits the lodge to only 10 anglers allowing each guest a single room.

Kau Tapen Lodge will limit the lodge to only 10 anglers from the second week in January through the first week in March. During these weeks, anglers will enjoy a single room and more water to fish on the Rio Grande. All other weeks have a max of 12 rods.

The fishing schedule is broken up between 4.5 hour morning and evening sessions. Anglers are driven to and from the river in comfortable 4-wheel drive vehicles fitted with rod racks and VHF radios. You’ll access 60-70 different pools on 18 miles of both banks on the Rio Grande with easy wading on a fine gravel river bottom. Kau Tapen’s Argentine and international guides are professional and dedicated to your success. They will offer casting instructions and will assist with approaching each pool, netting, weighting and releasing your trophies. Perhaps most importantly, they willingly and quickly change pools or beats to find more active fish.

Guests at Kau Tapen also have access to miles of the Rio Menendez which runs along the eastern border of their property. The Rio Menendez is the only tributary on the Rio Grande where Sea Run Brown Trout can successfully spawn.

In 1935, John Goodall stocked 60,000 Chilean salmo trutta eggs in 2 tributaries of the 70 km Rio Grande. Today, young Brown Trout spend an average of 2 years in the river before their first migration to the sea where they’ll spend 6 months before returning to the river with an average weight of 6 lbs. Sea Runs that spawn 4 times in the Rio Grande weigh over 20 lbs and some fish have been known to complete the cycle 6 times.

Studies show that the Sea Run Browns in Tierra del Fuego’s Rio Grande are about 17% heavier than other sea trout of the same length. Their size and high return rate are factors of low predation, biologically rich salt waters and a strict Catch and Release policy employed by all lodges. Rio Grande’s Sea Run Brown Trout population was estimated at 75,500 adult fish in 2008.

Today, the average daily catch rate on the Rio Grande is an amazing 3-6 fish per rod. The key to success is to adapt your fly fishing technique. Sea Run Browns are rather moody and will strike when the fly is presented well, at the right time and in the right spot. Be flexible with your tactics and listen to your guide. If a fly moving evenly and slowly still does not produce a strike, consider modifying the depth or fly pattern. Fly placement is also a factor. Like other anadromous salmonids, Sea Run Browns generally move up river at night, congregating at the head of the pool in the evening and at tail of the pool in the morning and against cut banks during the middle of the day. On overcast days the fish could be found in the middle of the pools.

Chromed Sea Run Brown Trout begin to enter the Rio Grande lower pools in early December and continue to enter until May. The peak weeks are unpredictable and fall sometime during the busy early January to late March timeframe, but regardless of the month, if conditions are good, the fishing is good. April is often overlooked and can be equally exciting and productive as mid-season. In April, all the fish that are going to return are now in the river with spectacular fall colors and weighting at their peak. Water levels are at their lowest, fish are more concentrated and the strong Tierra del Fuego winds are significantly diminished.

Day 1: Arrive Buenos Aires (EZE). Transfer to the domestic airport (AEP) and fly to Rio Grande (RGA). Guides will pick you up and transfer you 1 hour to Kau Tapen Lodge. Cocktails and dinner.

Day 8: Check out, transfer back to the Rio Grande Airport for your flight home.

With our intimate knowledge of Argentina and our specialized travel agent, we take all the guesswork out of travel so you can concentrate on packing. 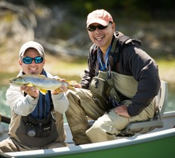